scipy’s generic_filter is pretty neat. Give it a function and a filter footprint, and it will apply the function at every footprint in the image. The trouble is that it can be a bit slow:

Yikes. But how about numpy.max instead?

Better, but still not great, especially when compared against the existing maximum filter:

I want to use this simple maximum filter example to show to build a low level callback (i.e., a lightly wrapped compiled C function) to be used with generic_filter in order to get better performance from custom filters (beyond just max).

The scipy docs provide a number of examples using geometric_transform to illustrate low level callbacks. I highly recommend reading those.

If we read the Notes section in the docstring for generic_filter we see:

This function also accepts low-level callback functions with one of the following signatures and wrapped in scipy.LowLevelCallable:

The docs go on to provide more details, but here is the summary: we’ll write a C function having the given signature that transforms buffer (the array of image values currently under the filter footprint) to produce a return value.

Then compile it to a shared library:

OK. Now let’s load it with ctypes and wrap it as a low level callable:

Now max_filter_llc can be used in generic_filter. Let’s time it!

Not bad. Although given that scipy’s maximum_filter still runs in half the time, there’s apparently some overhead to the generic_filter framework.

Note that we haven’t talked about the user_data parameter. This parameter allows for adding extra arguments (e.g., a global threshold value) to be used by the callback. The scipy docs provide some example usage that’s worth checking out.

Although, not all extra arguments can be plugged in as user-provided data. For example, as far as I can tell, it’s not possible to get the current position of the filter as an argument to the callback, which would be nice to optionally have in order to create position dependent filters. Maybe I will dive into the ndimage source to see if this sort of extension is feasible when I have some free time. 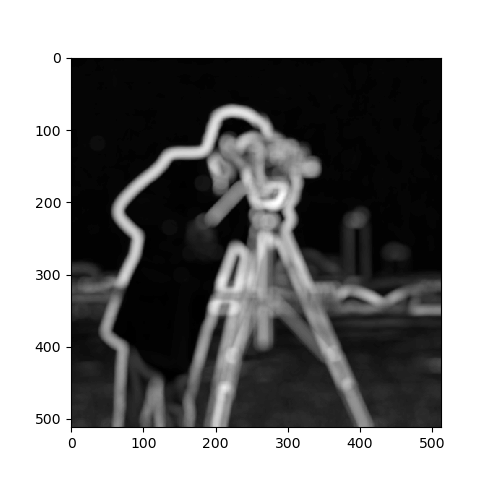 We went through all the rigmarole, so let’s at least write a filter that might not be readily available in pre-written routines. The following computes the standard deviation of the values under the filter footprint and uses that as the filter response. So, using this with generic_filter computes a sliding window standard deviation filter. This produces something not unlike a gradient magnitude image, i.e., it produces large (bright) values where the image changes intensity and small (dark) values where the image is homogeneous.